Eagle Cleaners celebrated their 25th anniversary on March 17, 2022, at 531 S. State Street, Clarks Summit. Eagle Cleaners has been serving Northeastern Pennsylvania for its dry-cleaning needs and has been a staple in the Abingtons since 1997.

Eagle Cleaners’ anniversary was officially recognized by the Pennsylvania House of Representatives, specifically State Representative Bridget Malloy Kosierowski, who presented owners Buddy and Kathy Croft with an official citation saluting Eagle Cleaners upon its richly deserved recognition; offering best wishes for continued growth and success in the years to come.

The citation was also witnessed by members of the Clarks Summit Borough Council, including Council President Gerrie Carey and Councilman Bob Shiels. 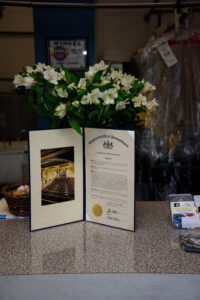 Buddy Croft began working at Eagle Cleaners in 2000 where he started his career as the Plant Manager, learning everything he knows from his parents and previous owners, Clyde and Jody Croft. Buddy and his wife, Kathy, took the reins from Buddy’s parents in 2013. Buddy and Kathy remain committed to the meticulous detail and superior customer service that has characterized Eagle Cleaners since its beginning.

Since 1997, Eagle Cleaners has taken pride in being part of their customer’s memorable moments. They believe it’s important to support the community in which we live and work. Eagle Cleaners is proud to partner with many organizations here at home in Northeastern Pennsylvania. They include:

Thank you to all our customers for their kind words of encouragement regarding our anniversary. We wouldn’t have been here for 25 years without all of you. Here’s to 25 more!

About the Author: Eagle Cleaners